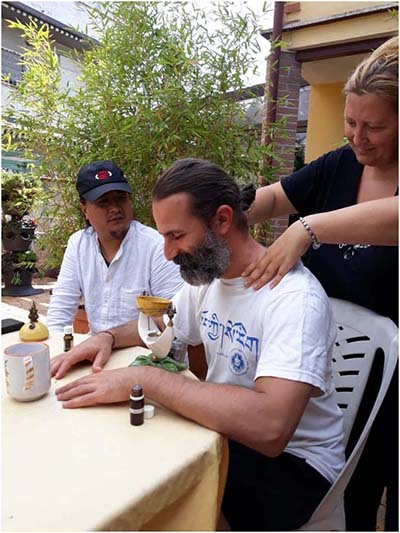 Touch is one of the senses, along with vision, tactile sensations, hearing and taste.

From the point of view of philosophy, all senses are our "doors" to the world, it is with their help that we learn the world. Based on feelings, we make a picture of the world, it is they who ultimately form our consciousness and Mind .

It is logical to assume that it is possible to treat by acting in a certain way on the senses.

And it’s very interesting that in ancient texts it says “nose (smell) is directly related to consciousness”.

Actually, this obvious fact is actively used by manufacturers of food products, cosmetics and household chemicals, but the use of smells for medicinal purposes remains for some reason "Cinderella."

Himalayan medicine has traditionally described smoke treatment. The technique is called "Lundug", that is, "Fumigation for Wind Diseases". However, modern technological capabilities make it possible to isolate and preserve natural smells, which can also be used for disorders of two other vital principles, as well as their combinations.

MATTM students know that Sowa Rigpa is the science of understanding the cause and effect, of using any means suitable for treating the disease. Therefore, having studied the ancient methods of treating the Lundug, you can use all the aromatic substances available now, both as a separate effect and in combination with other external procedures.